skip to main | skip to sidebar

When Ruben Dann is drafted out of a dead-end job delivering furniture, he hopes the army will teach him a useful trade. Instead he finds himself in another dead-end job, in the infantry, being herded around the battlefield by sergeants and officers, searching for an elusive enemy he doesn't want to find. Vesuvio in San Francisco will present an evening of readings from "Grunt's Minutia," Jack Yaghubian's account of sixteen days as a soldier in Vietnam, at 7 pm on Tuesday May 22. The program will be free, open to anyone 21 and older. Yaghubian, a longtime bartender legendary among North Beach pub crawlers who know him as "Jack the Hat," based the book on his own experiences on the DMZ in the fall of 1969. Alternately hysterical and harrowing, it follows 20-year-old "Ruben Dann" as he is transformed from a green draftee from a California beach town into a man who learns the hard way how to deal with war and death. Vesuvio is at 255 Columbus Ave. at Jack Kerouac Alley. For more information, please call (415) 362 3370. 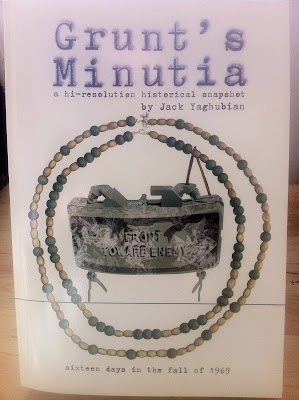 Posted by Vesuvio Cafe at 6:35 PM No comments:

VESUVIO CAFE TO PRESENT "HOW I GOT THAT STORY"

Vesuvio Cafe in San Francisco will present a free staged reading of
Amlin Gray's "How I Got That Story" on Tuesday June 21 at 7 pm.
Admission must be limited to those 21 and older.

The short, two-act play is a dark satire that follows an idealistic
reporter through his assignment to "Am-bo Land," a thinly-disguised
Viet Nam. The parallels to our current involvement in Iraq and
Afghanistan are striking as the reporter meets everyone from American
soldiers to local government officials and guerrilla fighters, a
religious leader and a teenage prostitute.

The production will be directed by Jim Reese who, in a tour-de-force,
will read 20 of the 21 roles. The reporter will be read by Tony Lioce,
a former editor for the Los Angeles Times and the San Jose Mercury
News.

When first produced in 1979, the play was hailed by the Hollywood
Reporter as "wildly funny, yet chronicling the horror and devastation
of war... a stunning theatrical achievement."

GREIL MARCUS TO READ AT VESUVIO 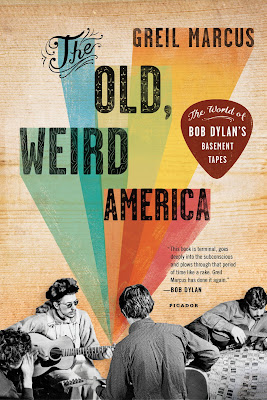 Acclaimed writer and critic Greil Marcus will launch a national tour of readings from his book "The Old, Weird America: The World of Bob Dylan's Basement Tapes" at the legendary Vesuvio Cafe in San Francisco on Tuesday, May 3 - exactly three weeks before Dylan's 70th birthday. The program will be free, open to anyone 21 and older and will start at 7 p.m.

Marcus' analyses of Dylan's work (recently collected in an anthology that spans 42 years, and which include the liner notes for the original release of "The Basement Tapes" by Columbia Records in 1975) have been hailed widely as some of the most astute and penetrating ever done. "No previous writer has so transportingly or authoritatively revealed Mr. Dylan against the receding vistas of American music and culture,” wrote Robert Polito in The New York Times Book Review. In Newsday, Stephanie Zacharek called "The Old, Weird America" the "year’s best work of criticism, hands down" while David Remnick in The New Yorker praised its "mad, sparkling brilliance." Dylan himself has said the book "goes deeply into the subconscious and plows through that period of time like a rake. Greil Marcus has done it again.”

Marcus, whose writings on popular culture also have focused on artists from Harmonica Frank and Robert Johnson to Elvis Presley, Randy Newman, Van Morrison, David Lynch and Marlon Brando, has taught at U.C. Berkeley, Princeton and the New School in New York City. He will take questions from the audience.

Vesuvio, at 255 Columbus Ave. in San Francisco's North Beach neighborhood, is an especially appropriate place for Marcus' tour to begin. In the '50s and early '60s, it was the bar of choice for the beats who would gather at City Lights Books right across the alley: Jack Kerouac, Allen Ginsberg, Lawrence Ferlinghetti, writers who were exerting an enormous influence on a kid named Robert Zimmerman - who over the years himself would have a few drinks at Vesuvio. Now more than 63 years old, it remains a hangout for poets, artists, actors and musicians, cab drivers and chess players, exotic dancers and seamen, business people and barflies - bon vivants from all walks of life, who have come from as close as the next street over and as far away as Mars.

A Fair To Remember 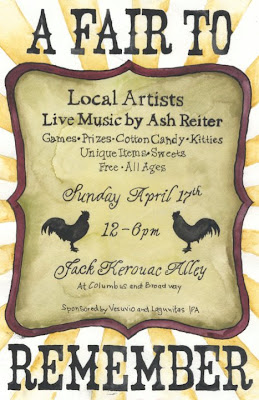 Ladies and gentlemen, boys and girls, kids of all ages. Art, Music, Candy Goodies, Good Times... all at "A Fair To Remember". Sunday, April 17th, from noon to six pm in Jack Kerouac Alley.
Posted by Vesuvio Cafe at 10:15 AM No comments:

SAN FRANCISCO - Vesuvio in North Beach will expand its series of free readings on Tuesday, September 28 with selections from "Nothing Left for the Dead," the first novel by M. Cazadores of Berkeley, who will be a featured participant. Accompanying music will be provided by David & Joanna, the up-and-coming duo whose sound has been described as "the Everly Brothers meeting the Velvet Underground."

For several years, the celebrated bohemian barroom at 255 Columbus Ave. has presented readings of work by writers long associated with the place, from Jack Kerouac and Allen Ginsberg to Richard Brautigan . This will be the first time a promising new author will be in the spotlight - and himself one of the readers, along with Vesuvio bartenders, waitresses and denizens under the direction of James Reese. It also will be the first time a local band is part of the program.

"Nothing Left for the Dead" is a novel that begins as a mystery and "degenerates" - the author's word - into a form of neo-existential literature. Its themes are indentured servitude, technology, American corporate plutocracy, racism, sheep, sex, love, music, drugs and time.

The reading will be free and open to anyone 21 and older, starting at 7 p.m., and will be followed by Cazadores taking questions from the audience.

For more than 60 years, Vesuvio, located where Columbus Avenue meets Jack Kerouac Alley, has been a hangout for writers, artists and actors, cab drivers and chess players, exotic dancers and seamen, business people and barflies - bon vivants from all walks of life, who have come from as close as the next street over and as far away as Mars.
Posted by Vesuvio Cafe at 11:27 AM No comments: 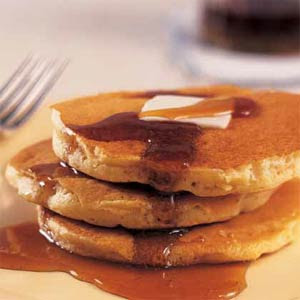 Before the kickoff at 11:30 am, from 9 to 11am, we will be offering up a pancake breakfast with all the fixin's -- eggs, bacon, toast, the whole shebang! Only a five dollar donation is required, so come on down, support the US soccer team and fill your belly in the process.

Oh yeah, we have drinks, too.

See you there!
Posted by Vesuvio Cafe at 3:40 PM No comments:

Posted by Vesuvio Cafe at 3:49 PM No comments: